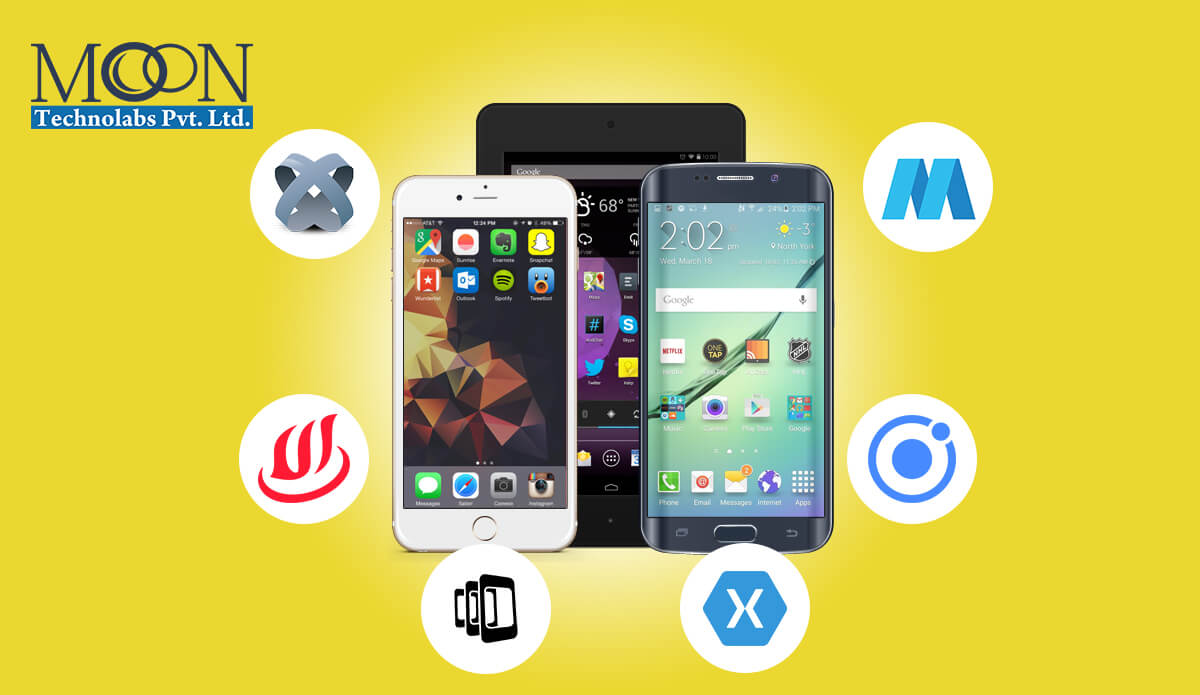 Much had to be accomplished if one wanted to develop an app a while ago. Because the only pathway to have successfully built an iOS and Android app would have been through the gateways of learning and implementing Java and Objective C. Now, I am not saying that it was impossible or rather not appealing, however, what I mean is that the tech-evolution happened.

With that evolution, the generation got more aware of these technologies in theoretical and practical aspects. Hence, there was a greater need to have built these apps in a way that could run on all the platforms such as Windows, iOS & Android and have greater appealing and visibility power. On that note, few developers worked on learning and successfully creating frameworks that don’t have to operate with Java and Objective C and yet gets the job done. Such apps as we know them are ‘Hybrid Mobile Apps’. These hybrid apps are written in CSS, HTML and JavaScript that is displayed in a mobile-optimized web view. The major advantage is that you only need to write a single codebase for any platforms. Let’s check them out turn by turn:

Ionic is one of the most promising open-source SDK for hybrid mobile development. Built using web technologies such as Sass, CSS and HTML5 on top of Angular.js and Apache Cordova, it provides several UI components to build rich and interactive apps. With more than 100 native device features like Bluetooth, HealthKit, Fingerprint Auth, Camera, Microphone can be accessed with Cordova/PhoneGap Plugins and TypeScript extensions.

This framework comes with the complete set of technical know-how guidelines, examples and component demos. This means that a developer using Ionic framework is able to get instant help on their own. It has vast and varied implications in different industries and also favourite among developers.

This is the most popular cross-platform framework-cum-packaging & releasing an app. Since the commercial version of PhoneGap is owned by Adobe & Apache and primarily based on open source Cordova, it is intended to provide robust and safe app development environment. There is no need to pay a subscription fee as it’s an open source project.

Having the basic understanding and knowledge of web framework like HTML5, CSS3 and JavaScript will allow you to create marvellous applications. PhoneGap has a huge community of developers who are available in case you come across any problems. PhoneGap provides you with the access to device APIs like Camera, GPS, accelerometer, etc, simultaneously offering a choice of either JavaScript or UI frameworks to get started with it.

Since the foundation in 2011, Xamarin has been constantly emerging as one of the best hybrid app developer platforms. Developed by Microsoft and based on its technology stack, Xamarin is comparatively built on upcoming & adaptive technology with a community base of around 1.4 million developers across the world. With Xamarin you can develop apps using C# and the same codebase can be used for different operating systems including Windows, Android, iOS, Mac OS, etc.

Common Language Infrastructure (CLI) and Common Language Specifications are the two cross-platform implementations that are primarily used. It has a very well documented set of procedures and guidelines to help you through every step of the way. With an exception of roughly 10%, the rest of the codes of Xamarin can be reused to build mobile apps for other platforms. This framework is also now widely used to develop Apple WatchKit and Android Wearable apps.

With the grace of popularity of this framework, unity has thousands of game developers by the virtue of which one can get easy solutions to any problems while developing apps. To develop such extensive gaming apps, of course, one has access to free tutorials, books but moreover, it also has a store to where you could purchase gaming components like models, animations, extensions and sounds and many more to give your gaming app everything that it needs to make it instant hit and get downloads in sufficient numbers.

Appcelerator Titanium is an open source mobile application framework which is basically written in JavaScript. To begin with, you will need to download Titanium Studio. Titanium SDK extends the functionality of apps with a number of mobile platform APIs and Cloud service to use as an app backend. One can also easily access the hardware of the phone with the several APIs.

The best feature of it is that you could use the same code which drastically reduces the development time. Titanium is benefited with Alloy, an MVC framework that enhances the rapid development of mobile apps and hence, reduces the time, effort and the lines of codes being used. The mere hiccup in this framework is that if you want to develop an app for personal use, it can be done for free, however, if it’s for a commercial or for an enterprise use than you will need to buy the subscription for the same.

The last one in our list is Framework 7, which is used to build hybrid applications. If you are well adept with HTML, CSS and JavaScript technicalities, Framework 7 delivers the best apps as it does not have any external dependencies like React or Angular and hence, it makes the process swift and agile. It comes with dozens of UI Widgets and elements like models, popup, action sheet, media lists, layout grid, etc.

It’s free and has extensive module development assistance to walk you through the development process. Framework 7 is excluding any tool for app packaging or emulation, therefore, it is necessary that you combine it with PhoneGap or Cordova. It marvellously helps in creating native-like applications featuring animations to make your app look even more pleasing and likeable.

At the core, Moon Technolabs is driven by the vision, sharpness and flourished under the leadership quality led by none other than the founder & CEO i.e, Mr Jayanti Katariya. His simple-approach & never-give-up attitude is the virtue or rather attitude that the entire team tries to grasp and follow. From client relations to business development, from industry updates to floor walking, he does everything in his power to provide support to the team. He always puts the effort in enhancing and building team’s technical abilities. His other interests and hobbies include travelling, sports and technical reading.